Six Reasons Why Celebrating Christ-Mass is Cheating on Your Bridegroom 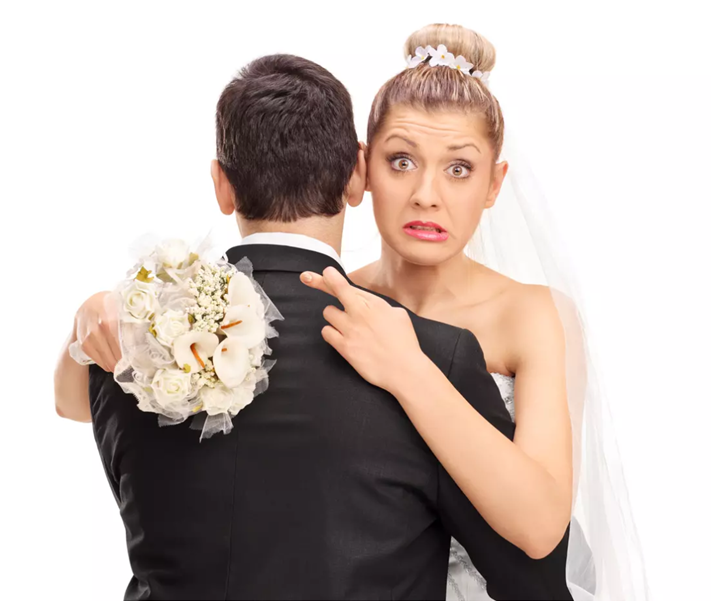 Celebrating Christ-Mass is violating the Towrah on many different levels. If you profess to be born-again by the blood of the Lamb, and are a follower of Messiah, (whether you call him Jesus, Yeshua, Yahusha, or Yahuwshuwa), it does not matter.

At any level, you are in violation of your marriage covenant with Messiah, if you continue to celebrate Christ-Mass, even after learning the truth about it’s origins.

What follows in this blog, are six major reasons why celebrating this false holiday violates the Marriage Covenant, that YaHuWaH Made with Yisra’el.

If you call yourself a Christian, or Messianic, or Natzariym, you are part of the Commonwealth of Yisra’el, according to Ephesians 5:11-19. Additionally, celebrating Christ-Mass violates the Renewed Marriage Covenant that Messiah made with his backslidden Bride (Yisra’el) at the Passover Meal, the night before he died. Therefore, you do not qualify to be under the New Covenant, if you continue to celebrate this satanic holiday, once you have been presented with the truth.

In 1981, I was first born-again by the blood of Messiah, and had repented of all my sins. However, I was not privy to this information about Christ-Mass. Before the Internet, many of us were beholden to what our Pastors taught in Church, and we did not have much access to information about the occult roots of so-called Christian holidays.

For me, I became aware of the occult roots of Christ-Mass in 1996, after reading a book by Chick Publications entitled: “The Alberto Story.” Alberto was a former Jesuit Priest, who came to know the real Messiah, and left the Roman Catholic Church after becoming born-again in the 1970’s.
His story enlightened me to the pagan roots of Christ-Mass, Easter, Valentine’s Day, Halloween, etc. It was right after that discovery, that I began to make the transition away from celebrating pagan holidays, and learning to keep the Prophetic Feasts of YaHuWaH.
If you call yourself a follower of Messiah, here are Five Major Reasons why Celebrating Christ-Mass is Cheating on Him:
1.) The wrong date of December 25th (The Season of the Winter Solstice) was chosen deliberately by Mystery Babylon Religion to lump in the real Messiah with all the imposters of false pagan religions.
YaHuWaH expressly states that he does not want us to learn how the heathens worship their gods, and then say that we are doing it for him. You can make the excuse that “We can take back the pagan holidays for Christ,” but he makes it abundantly clear, that he does not see it that way. He wants us to have no part in learning to worship him the same way the heathens do.
Debariym (Deuteronomy) 12:30 Take heed to yourself that you be not snared by following them, after that they be destroyed from before you; and that you inquire not after their gods, saying, How did these nations serve their gods? Even so will I do likewise.
Debariym (Deuteronomy) 12:31 You shall not do so unto YHWH your Elohiym: for every abomination to YHWH, which he hates, have they done unto their gods; for even their sons and their daughters they have burnt in the fire to their gods.
*Christ-Mass celebrates the sacrificing of children on altars to Satan (and in abortions), and it is still taking place to this day!
See these blogs at the links below:
“Sixteen Crucified Saviors? Why Messiah’s Birthday Matters!”
“December 25th: Birth of Historical Antichrists.”
2.) The phrase “Merry Christ-Mass” celebrates the blasphemous Roman Catholic Mass, where their Catechism expressly states, that at every Mass “Christ becomes the victim anew, as though he were never sacrificed.”
This is contrary to Scripture, as we are told that “Messiah died once for sins (Romans 6:10), and that those who continue to sin willfully are “Crucifying to themselves the Son of Elohiym afresh and putting him to an open shame” (Hebrews 6:6).
See these blogs:
“What is the Roman Catholic Mass?”
“Should You Be Merry About Christ-Mass?”
3.) The Real Messiah had to have been born on a Prophetic Feast Day of YaHuWaH, so that he would be validated as the Genuine Messiah of Yisra’el.
Any other date for the Messiah of Yisra’el to make his entrance into the world as the “King of Kings & Master of Masters” (other than a Holy Feast of Yah), would disqualify him. This is what is meant in Revelation 19:10 when it says, “The Testimony of Yahuwshuwa is the Spirit of Prophecy.”
See these blogs:
“When Was the Real Messiah Born & Why Does it Matter?”
“Why Messiah Was Born on the Feast of Trumpets Instead of Tabernacles.”
“What is the Testimony of Messiah?”
4.) Celebrating our Messiah’s birth on the same date as the Impostors is committing Idolatry & Adultery against him with false lovers (see Hosea chapter 2).
See this blog:
“An Illustration of Messiah & The Christian Church: The Story of Rachel, Lucas & Joshua.”
5.) Celebrating Santa Claus is a violation of Towrah on many levels:
*You are teaching your children that it’s okay to tell lies, all in the name of “fun.”
*You are teaching your children to commit idolatry, as they write letters and pray to a fictitious character that does not exist. This opens them up to the demonic realm to have contact, and communication with “Imaginary Friends” and demonic entities.
*You are teaching  your children that being “good” rewards you with material things. This does not train your child to be obedient to YaHuWaH by being filled with his Spirit. It does not teach them that being “good” is a fruit of the Spirit, rather than something you do only outwardly, in order to earn material rewards. This does not build righteous character in your them. Instead, it teaches them that they can be bribed into behaving, if the price is right.
*The Occult World openly admits that “Santa” is an Anagram for “Satan,” thus, you are training up your child to worshiping the Devil.
See this blog:
“Santa Claus or Satan Claws?”
6.) Worshipping Trees has been a Custom of the heathens, since the Garden of Eden, and it is a serious violation of our covenant with YaHuWaH.
Many of you already know the story in Genesis, of how Eve was enticed to eat from the forbidden tree. But have you considered that Chawah (Eve) was enamored with the tree and it's lovely fruit, before she made the decision to eat it?
You see, it was how beautiful the tree appeared to her eyes, that enticed her! 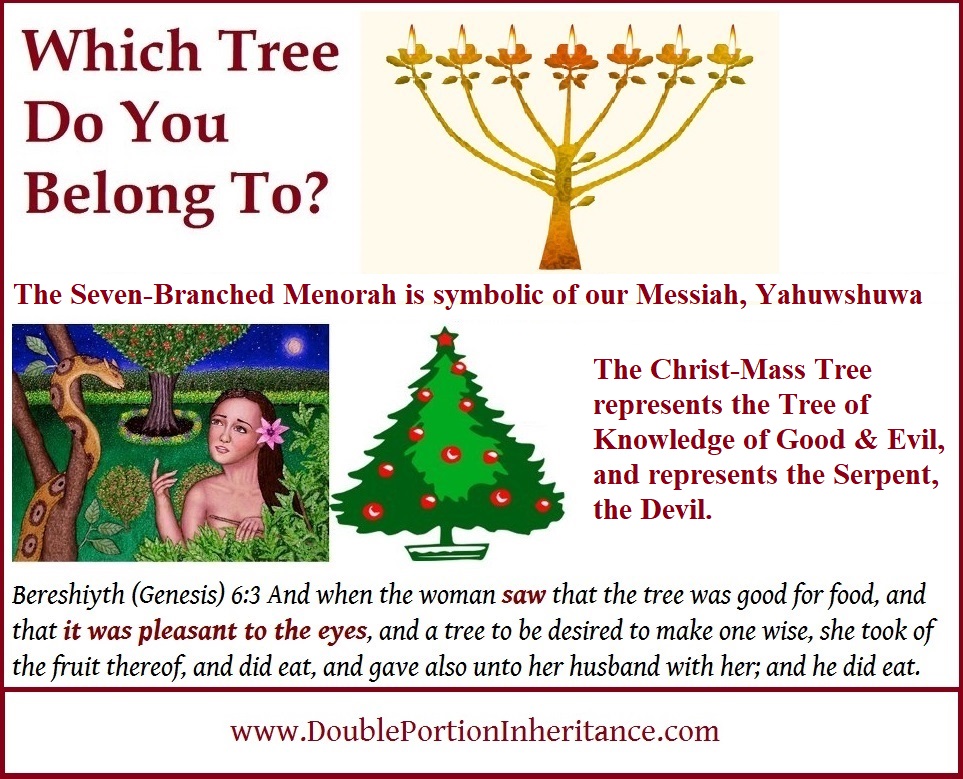 You may rationalize to yourself that the prohibition in Jeremiah chapter 10 is not about Christ-Mass Trees, as many do today. However, did you know that there are at least TEN other warnings in the Scriptures against worshipping trees?
Yirmeyahuw (Jeremiah) 10:

1 Hear you the word which YHWH speaks unto you, O house of Yisra’el:
2  Thus says YHWH, Learn not the way of the heathen, and be not dismayed at the signs of heaven; for the heathen are dismayed at them.
3  For the customs of the people are vain: for one cuts a tree out of the forest, the work of the hands of the workman, with the axe.
4  They deck it with silver and with gold; they fasten it with nails and with hammers, that it move not.
If you are one of those people that try and rationalize that these verses in Jeremiah are not speaking about Christ-Mass trees, take a look at this meme.