I have noticed that many people are buying into the notion that the name of our Messiah should be spelled as “Yahusha,” rather than “Yahuwshuwa/Yahushua.” Additionally, there is a false rumor which purports that the word “shuwa” in the name Yahuwshuwa means something wicked. I will show you in this blog why this is simply not true.

I want to begin by saying that either of these two English spellings for the name “Joshua” are found in the Hebrew Masoretic Text of the Tanakh (Old Testament): Yahuwshuwa/Yahushua, Yahusha. 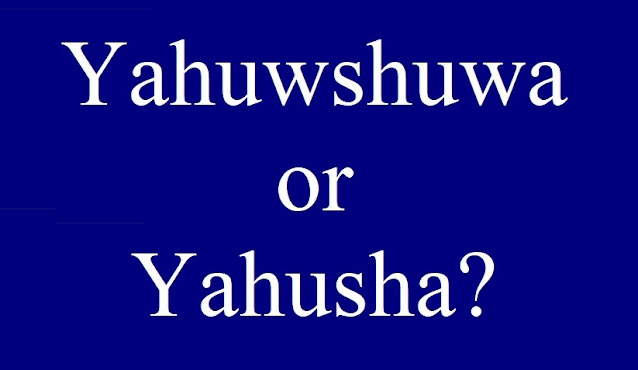 There are only two instances in the entire Tanakh (Old Testament), where the name “Joshua” appears with all six Hebrew letters in it, spelled as Yod, Hey, Waw, Shin, Waw, Ayin (YHWShWA), rendered as “Yahuwshuwa.”

Many people rationalize that because there are more instances of the “Yahusha,” spelling than there are “Yahuwshuwa,” that the majority proves accuracy. I submit to you, that there is evidence to suggest that three times, the scribes accidentally left the full six letters to the name “Joshua,” in the text, because YaHuWaH wants us to know our Messiah’s full name! Therefore, he allowed three witnesses to testify in the Scriptures for the name “Yahuwshuwa!”
The same thing is true of the name “Joseph,” which is rendered in Scripture as “Yowceph,” which is #H3130 in the Hebrew Concordance, meaning “let him add.” However, there is a fuller form of “Joseph,” which leaves the Father’s name intact. It is #H3084, rendered as “Yhowceph,” (Yahuwceph), meaning “YaHuWaH shall add!” The fuller form of Yahuwceph is found in Psalm 81:5. Why would there be only one place in Scripture for the full name of Yahuwceph? Because, it is obvious that the “Lying pen of the scribes” (Jeremiah 8:8) has been trying to hide our creator’s name from us!
I find it fascinating that the only place where Joseph’s name contains the Father’s name in it, says something about hearing a language that was unknown to him. It reminds me of Tsphanyahuw (Zephaniah) 3:8-9 where we are told that YaHuWaH will restore the people of the earth “A pure language,” so that we may all call upon his name “With one consent!”
Tehilliym (Psalm) 81:5 He appointed it in Yahuwsěph for a witness, When He went throughout the land of Mitsrayim (Egypt); I heard a language that I did not know. 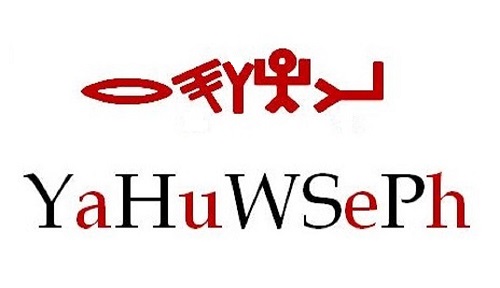 What if I told you that the real reason why there are so many scribal errors for the name “Joshua,” in the Tanakh (Old Testament) is because there has been a ban on pronouncing the divine name of our Creator since the Jews were in Babylonian Captivity? To learn more, see my other blog “My People Shall Know My Name!”

Additionally, there are four different ways that the name “Joshua” is spelled in the Tanakh (Old Testament). These four variations for the name “Joshua,” are the result of either scribal errors, or the deliberate concealment by the scribes of our Messiah’s name. Why would they do such a thing?

Because there is a ban on the divine name of our Creator, in the Jewish Babylonian Talmud. The devil hates our Messiah’s name for obvious reasons. In Acts 4:12, we are told that there is only “One name under heaven, whereby we must be saved.”

The adversary does not want us to believe in Yahuwshuwa as the Messiah, therefore, he has used the “Lying pen of the scribes” (Jeremiah 8:8), to confuse us about the one name that brings salvation to the world!

These are the four variations for the name “Joshua.”

In this blog, I want to specifically debunk the notion that the word “shuwa,” found on the end of the name “Yahuwshuwa” means something evil or wicked.

This rumor against the name “Yahuwshuwa” is a false doctrine, which claims that the word “shuwa” in Hebrew means “emptiness, vanity, falsehood” or “to cry out.”

Let’s test this theory shall we?

Look up the word for “salvation” in Hebrew.

It is H#3444 in the Hebrew Strong’s Concordance as follows: 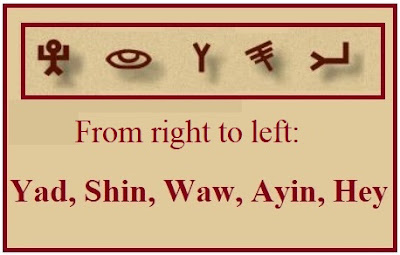 You will see 5 Hebrew Letters for the word “salvation” which are: Yod, Shin, Waw, Ayin, Hey.

*Note: in Ancient Hebrew, this word (shava) would be rendered as shauwa, (pronounced sha-oo-ah) not “shuwa.” The “shuwa” in Yahuwshuwa is pronounced as “shoo-ah.”
See this link from the Jewish Encyclopedia, explaining that the Ancient Hebrew letter “waw” was changed to a “vav” in Modern Times: Jewish Encyclopedia Waw
You will see three Hebrew letters for the word “shava” (in ancient letters it is rendered as shauwa, not shuwa). These three letters are: Shin, Ayin, Waw (Vav). The extra letter “a” on the end of the word was not there originally. Therefore “shauwa,” in the original Hebrew Tanakh is “shauw/shau,” not the same word as “shuwa” in Yahuwshuwa.
The word “shuwa” or “shua” in Yahuwshuwa is rendered as: Shin, Waw, Ayin.

Therefore, shauwa, and “shuwa” are not the same word, for they are spelled differently!
Can you tell the difference? The word they are claiming means “to cry out for help” is “shauwa” spelled as Shin, Ayin, Waw, (pronounced sha-oo); whereas the word “shuwa” in the name Yahuwshuwa is spelled Shin, Waw, Ayin (pronounced shoo-ah). The Ayin an the Waw are in reverse, therefore, they are not the same word!
Next, look up another word in Hebrew which means: “emptiness, vanity, falsehood, nothingness, worthlessness.”
This word is as follows in the Hebrew Strong’s Concordance:
#H7723 - shav’ שָׁוְא  shav' shawv or shav {shav}; from the same as 7722 in the sense of desolating; evil (as destructive), literally (ruin) or morally (especially guile); figuratively idolatry (as false, subjective), uselessness (as deceptive, objective; also adverbially, in vain):--false(-ly), lie, lying, vain, vanity.

This is the same word that is used in Exodus 20:7:
“You shall not take the name of YHWH your Elohiym in vain (shav); for YHWH will not hold him guiltless that takes his name in vain (shav).”
As you can see, this word has three Hebrew letters: Shin, Waw (Vav), Aleph. This word (shav) ends with an “aleph,” rather than with an “ayin,” as seen on the end of the name Yahuwshuwa (Joshua).
These are four different words in Hebrew, with different meanings, different letters, and different spellings!
Those who are trying to purport that the word “shuwa” (salvation) in Hebrew means “vanity, emptiness, to cry out” are now shown to be wrong!
This false argument has been shattered!
Our Messiah’s name is Yahuwshuwa!
See the name “Joshua” in the Hebrew Strong’s Concordance below:
#3091 Yhowshuwa` yeh-ho-shoo'-ah or Yhowshua {yeh-ho-shoo'-ah}; from 3068 and 3467; Jehovah-saved; Jehoshua (i.e. Joshua), the Jewish leader:--Jehoshua, Jehoshuah, Joshua. Compare 1954, 3442. 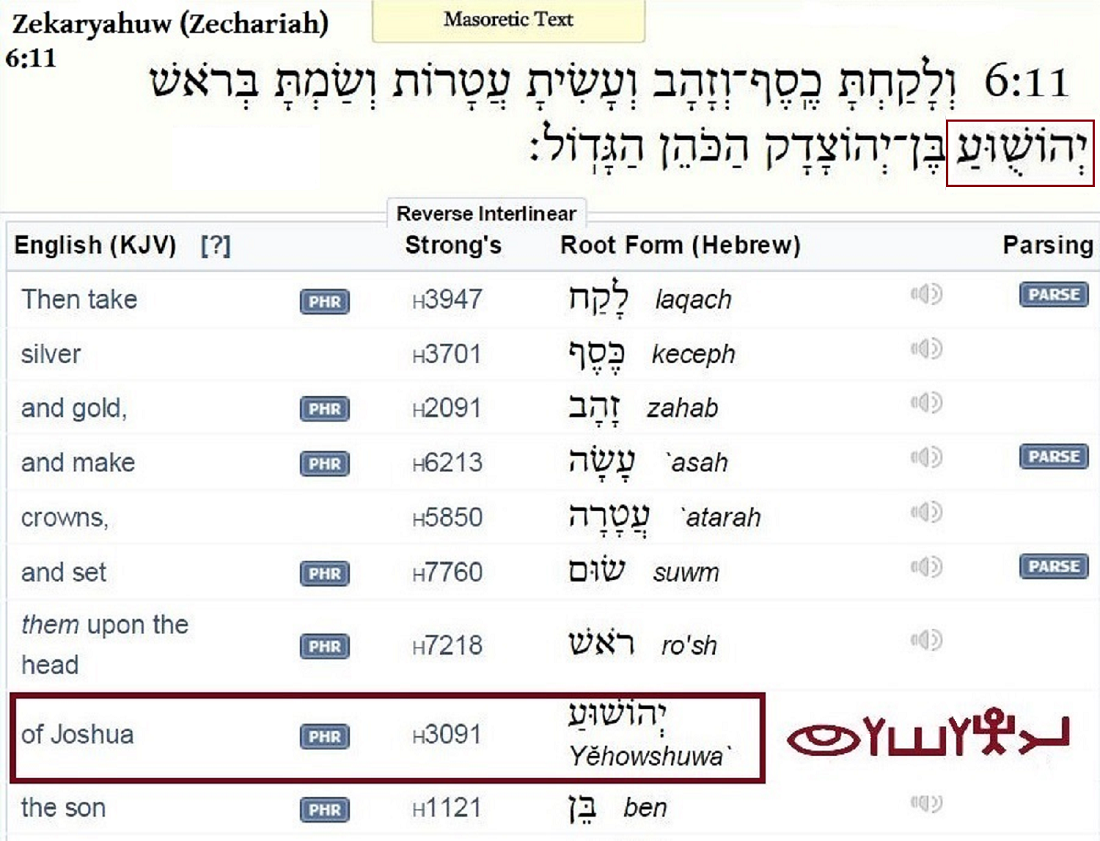 As you can see, the name of our Messiah, Yahuwshuwa is 6 Hebrew Letters: יְהוֹשׁוּעַ Yad, Hey, Waw, Shin, Waw, Ayin. 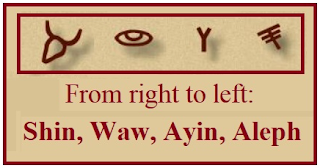 There is also a proper name for two Hebrew women, in 1st Chronicles 2:3 & 1st Chronicles 7:32, which is the name “Shuwa,” Strong’s #H7774, meaning “wealth.”
In English, it resembles the same letters that are at the end of the name Yahuwshuwa (Joshua). However, this name “Shuwa,” consists of 4 Hebrew Letters: Shin, Waw, Ayin, Aleph.
This is a different spelling from the “shuwa,” that we see on the end of the name “Yahuwshuwa” (Joshua). The shuwa on the end of Yahuwshuwa consist of only three Hebrew letters Shin, Waw, Ayin, and this word has only two syllables (pronounced shoo-ah).
The name “Shuwa” should be rendered in English as “Shuwaa,” with three syllables, (pronounced shoo-ah-ah).
Making these false arguments about the word “shuwa” in Yahuwshuwa is like claiming that the words “ear, bear, & near” all mean the same thing in English. Just because all three of these words have the word “ear” in them, does not make them the same word!
There are a couple of prophetic reasons why the name YaHuWShuWA (Joshua) is spelled with two “waws” (vavs) rather than only one waw (vav). 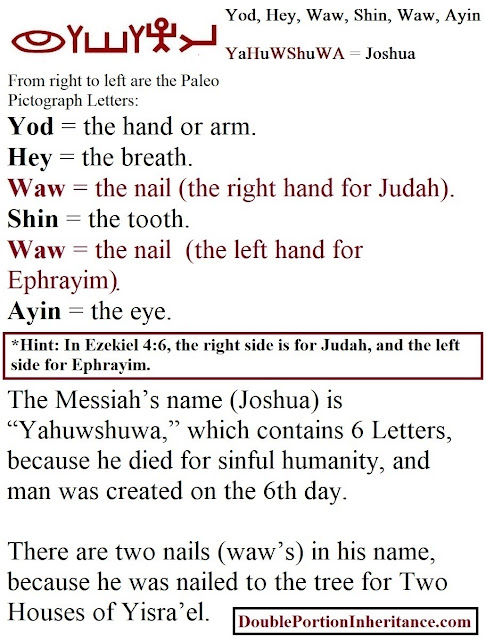 The Hebrew letter “waw” (vav) means “the nail,” and our Messiah was nailed to the tree for “Both house of Yisra’el.”
In Ezekiel 4:6, we are shown that Ezekiel was commanded to lay on his right side for the House of Yahuwdah (Judah), and he was told to lay on his left side for the House of Ephrayim.
Therefore, our Messiah was nailed to the tree for Both Houses of Yisra’el, and this means that there should be two “nails” (two waws) in his name, rather than only one waw (vav)!
Also, see the following article by “Followers of Yah,” to learn why the English letter “w” is the grammatically correct letter to be used to represent the “waw” (vav) as a consonant; and the “u” represents the “waw” (vav) as a vowel.
When these two letters are together as “uw,” it forms what is called a “diphthong.” The “uw,” makes the sound “who,” as in the name YaHuWaH, which is pronounced as “Yah-who-wah.” Without the
“w,” there is not breathy “who” sound, as in “Yahuw.”
U, V or W?
http://yahushua.net/YAHUWAH/chapter_07.htm
The Dead Sea Scrolls corroborate that “Yahuwshuwa” this is the correct spelling for our Messiah’s name.
Yahushua in the Dead Sea Scrolls
Proving The “Shua” In “Yahushua”
Posted by DoublePortionInheritance at 4:02 PM