Who Has Bewitched You?

What did Paul mean when he wrote the following words? Galatians 3:1 O foolish Galatians, who has bewitched you, that you should not obey the truth, before whose eyes Yahuwshuwa ha’Mashiyach has been evidently set forth, crucified among you?
In Psalm 119:142, King David wrote that the Mosaic Law/Towrah is “THE TRUTH!”
In Galatians 3:1, Paul wrote to the Galatians, describing their spiritual condition as “BEWITCHED,” because they were “NOT OBEYING THE TRUTH!”
The Greek word for “bewitched,” is “baskaino,” which means “to be fascinated, to be seduced or deceived.” 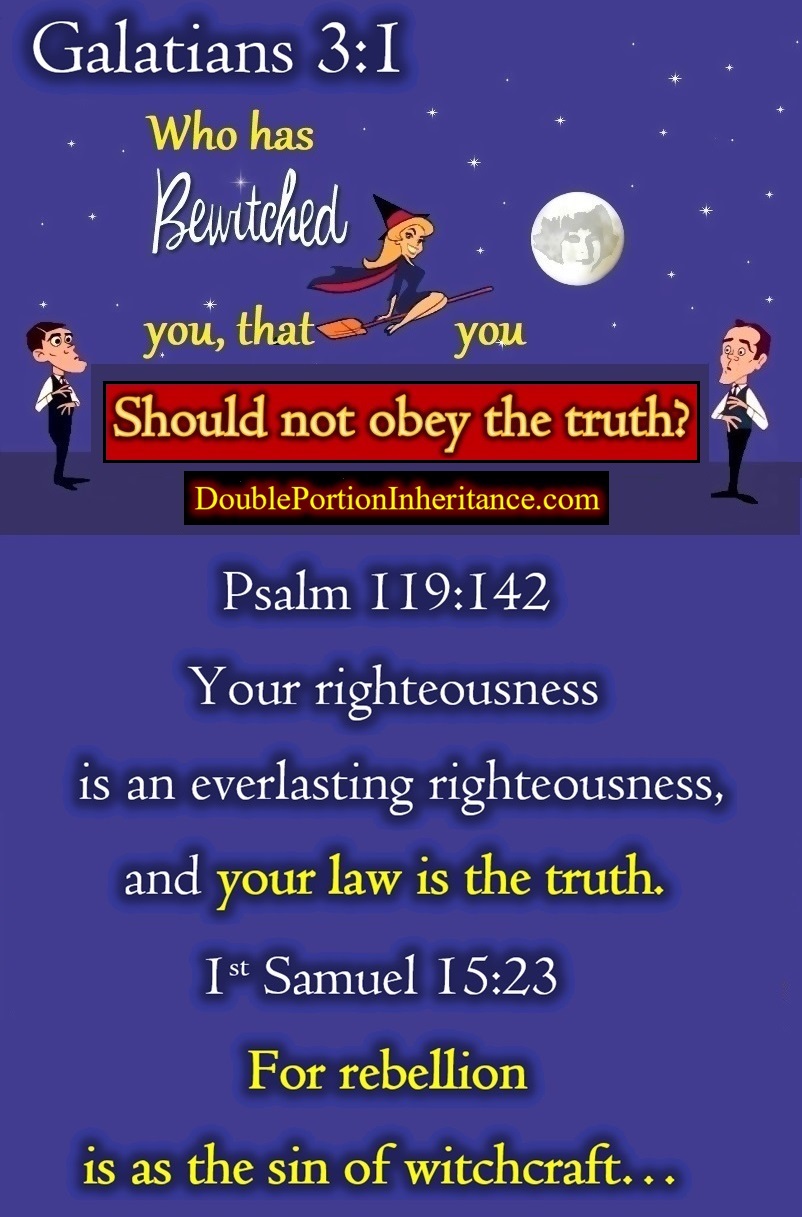 Before digging into Paul’s letter to the Galatians, it is imperative that you understand where this term “Works of the Law” came from.
A Cult Called “Works of the Law”
In 1947, an important document was found with the “Dead Sea Scrolls” proving that Paul’s letter to the Galatians was not against the Mosaic Law (Towrah).
When Paul condemned “The Works of the Law,” he was specifically speaking about an Essene Sect of Judaism that enforced outward circumcision in the flesh as a means to salvation. In the Greek Textus Receptus, the phrase “Works of the Law,” is used six times by Paul, but the Greek quotation marks were removed by the English translators, thus making it appear that Paul was against the Law of Moses!
The name of this sect in Hebrew was called “Ma’seh ha’Torah,” meaning “Some of the Works of the Law.” It meant that they were requiring new converts to adhere to certain laws of Moses, before being admitted into their sect of Judaism.
As a matter of fact, there have been lawsuits filed in American Courts over this document, because Christian Pastors do not want to admit that the Law of Moses is still relevant for today’s believers!
What many people fail to understand, is that circumcision in the flesh, was never a prerequisite to salvation, not even under the “Abrahamic & Mosaic Covenants!” Abraham received circumcision in his flesh only as a “SIGN” of his faith (Romans 4:11), which he had already obtained long before being circumcised.
Abraham began walking with YaHuWaH at the age of 75, but he was circumcised in his flesh at the age of 99!
To learn more about this cult, click on the link below:
http://ccg.org/english/s/p104.html
Are Followers of Messiah Required to be Circumcised in the Flesh?
Circumcision in the flesh, is not, and never was a requirement for salvation. This is the reason why Paul rebuked the Galatians, because many of them were joining this Cult called “Works of the Law,” and they were falsely teaching men to become circumcised in their flesh as a means to salvation. Paul explained in Romans 4:11, that Abraham was circumcised “AS AN OUTWARD SIGN,” of his salvation, not a means to his salvation. Abraham was circumcised in his flesh at the age of 99, even though he had already been walking with YaHuWaH since he was 75 years old.
However, it is, (and will be) required for men to be able to enter the holy place in the Temple, when Messiah returns to earth. During our Messiah’s Millennial reign on earth, he will rebuild the Tabernacle of David, (Isaiah 16:5; Amos 9:11; Acts 15:16), followed by the Ezekiel Temple, which will be a more permanent structure (Ezekiel 40-48). The Tabernacle/Temple in the Millennium will function as it once did during the reign of King David.
In the Ezekiel 44 tells us that during the one-thousand-year reign of Messiah one earth, men will be required to be circumcised in both the heart and in the flesh, before coming into the sanctuary, or the inner court of the Temple:
Yechezqel (Ezekiel) 44:7 In that you have brought into my sanctuary strangers, uncircumcised in heart, and uncircumcised in flesh, to be in my sanctuary, to pollute it, even my house, when you offer my bread, the fat and the blood, and they have broken my covenant because of all your abominations.
Yechezqel (Ezekiel) 44:9 Thus says YHWH Elohiym; No stranger, uncircumcised in heart, nor uncircumcised in flesh, shall enter into my sanctuary, of any stranger that is among the children of Yisrael.
However, when believers in Messiah get a new incorruptible/immortal body, it will be a full-body circumcision:
Colossians 2:11 In whom also you are circumcised with the circumcision made without hands, in putting off the body of the sins of the flesh by the circumcision of Messiah.
Therefore, those who are part of the first resurrection, will be circumcised by our Messiah at his return. For grown men who want to be circumcised in the flesh AFTER they are born-again, that’s fine, but water baptism, followed by being born-again serves the same purpose (Mark 16:16).
Unless, of course men, want to be able to go to the Temple in Jerusalem, then it is required for men to be circumcised both in the flesh and in the heart.
I highly recommend circumcision for grown men, who were not circumcised as infants (for practical and health reasons); because studies have shown that women who are married to uncircumcised men, are more susceptible to cervical cancer.
Circumcised men compared with uncircumcised men have also been shown in clinical trials to be less likely to acquire new infections with syphilis (by 42%), genital ulcer disease (by 48%), genital herpes (by 28% to 45%), and high-risk strains of human papillomavirus associated with cancer (by 24% to 47% percent).
Circumcision in Males For Disease Prevention
Cervical HPV infection was associated with a 77-fold increase in cervical cancer risk. A Danish study that found 5-fold lower HPV prevalence in circumcised men concluded that, “The female partners of circumcised men are less exposed to cervical cancer because these men are less likely to be infected with HPV.”
Male Circumcision Greatly Reduces Risk of Cervical Cancer in Female Partners
For infants, I strongly advise that we should circumcise our infant boys at 8-days old according to the Torah, especially for health reasons. The only problem is, that doctors in the hospitals don’t do it correctly, and they often remove too much skin. You can hire what is called a “Moel,” which is a Jewish Rabbi who is trained properly to do it for your 8-day old infant.
Posted by DoublePortionInheritance at 1:51 AM