By Maria Merola
© Copyright Double Portion Inheritance, September 2015
http://www.DoublePortionInheritance.com
https://www.paypal.com/paypalme/DPIMinistries
This concept out of Job 38:12-14 is often misunderstood, and taken out of context to describe the earth being formed for the first time at the creation. As you can see by the illustration, Flat-earthers take Job 38:14 to mean that the earth was formed at the creation like a stamp that flattens out a piece of clay. 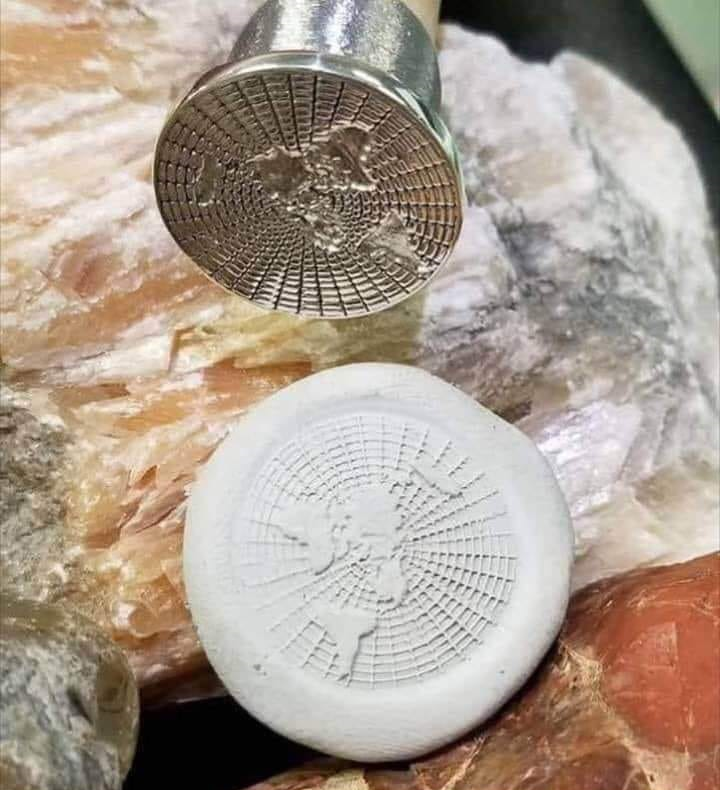 However, when reading the entire chapter of Job 38, it is clear, YaHuWaH is addressing Job, (verse 12) and asking him if he has “Commanded the morning, and caused the dawn to know his place.”
He continues in verse 13-14, explaining that each new day provides an opportunity for the inhabitants of the earth to “TURN” back to Messiah, who is “THE LIGHT OF THE WORLD!” (John 8:12; 9:5).
The Hebrew word for “TURN” is #2015, which means: TO RETURN, TO CHANGE, BE CONVERTED!
In other words, the earth is given a chance each new day to REPENT!
Our Messiah is a prophetic picture of “THE SUN,” as he is called “THE SUN OF RIGHTEOUSNESS” in Malachi 4:2. As the earth “TURNS” towards the sun every morning, it is a prophetic picture of the inhabitants of the earth turning back to the light of the world, which is Messiah!
Yowb (Job) 38:12 Have you commanded the morning since your days; and caused the dayspring (dawn) to know his place;
Yowb (Job) 38:13 That it might take hold of the ends of the earth, that the wicked might be shaken out of it?
Yowb (Job) 38:14 It is turned as clay to the seal; and they stand as a garment.
*Explanation: What is taking hold of the ends of the earth? In verse 12, it is the dawn or dayspring that takes hold of the ends of the earth. The light of the sun takes hold of the ends of the earth.
The phrase “ends of the earth,” is the Hebrew word “kanaph,” which literally means “quarter or quadrant.” I used an illustration (below) showing the definition of “kanaph,” from the Hebrew Concordance, and also an orange cut into quarters, for the four cardinal directions. 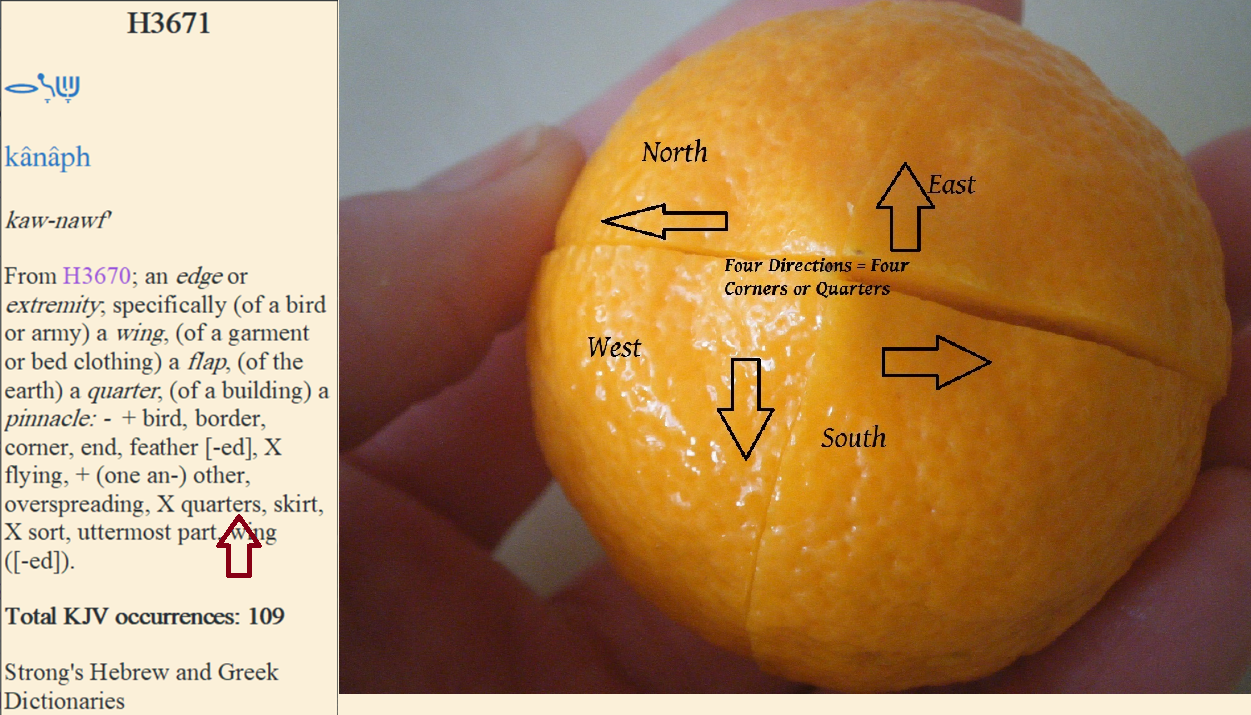 Each new day brings the dawn, (sunrise), which takes hold of the ends of the earth, by lighting up the entire half of the globe. How do we know that the earth is shaped like a globe or a sphere? The Hebrew phrase “circle of the earth,” in Isaiah 40:22 is a “sphere.” In 36 places within scripture, the word “sphere.” is the Hebrew word “tebel,” which means “the globe.” 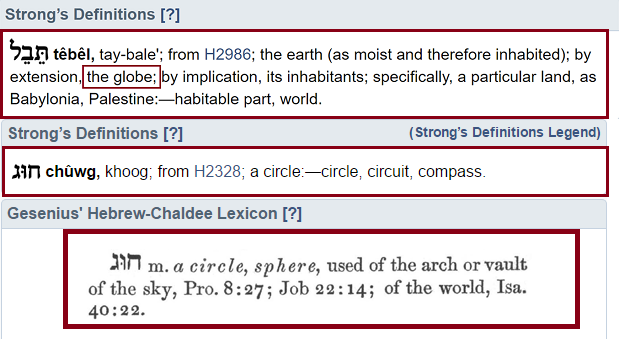 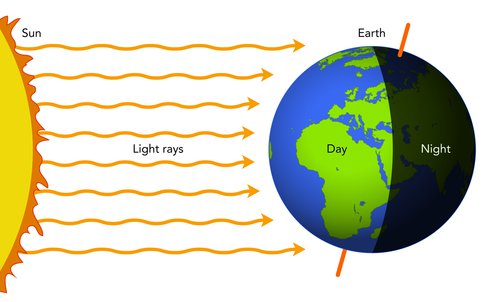 This is the method by which YaHuWaH causes the wicked to be “shaken,” like rotten fruit that falls from a tree to the ground! With each new day, the earth is “turned,” back to the light, which is symbolic of our Messiah, who is prophetically called “The sun of righteousness,” (shemesh tzedaqa). As the earth turns, the images on earth reappear as the light of the sun rolls over it. The imagery that is being described in Job 38:14 is like when ancient clay seals are rolled over a fresh slab of moist clay, and it forms images that stand out. 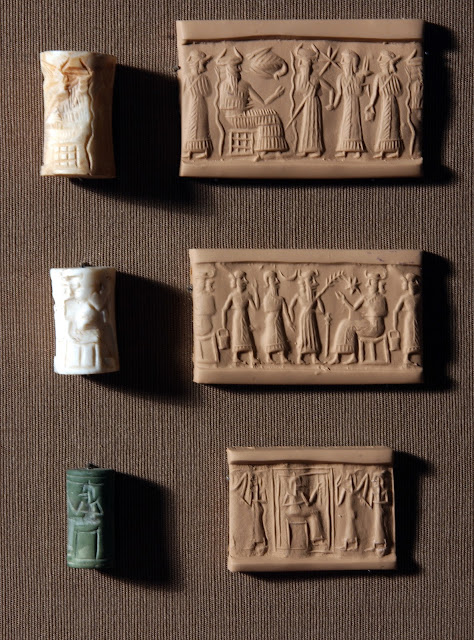 Ancient clay seals are shaped like cylinders, like cardboard toilet paper rolls. They roll these over a piece of clay, and it forms images or shapes. This is what is meant in verse 14, when it says “THEY STAND OUT AS A GARMENT.”
The Hebrew word for “GARMENT,” means the following:
#3830 lbuwsh leb-oosh' or lbush {leb-oosh'}; from 3847; a garment (literally or figuratively); by implication (euphemism for a wife):--apparel, clothed with, clothing, garment, raiment, vestment, vesture.
#3847 labash law-bash' or labesh {law-bashe'}; a primitive root; properly, wrap around, i.e. (by implication) to put on a garment or clothe (oneself, or another), literally or figuratively:--(in) apparel, arm, array (self), clothe (self), come upon, put (on, upon), wear.
From the above definition, we are reminded of the prophecy in Revelation 12, when the Apostle Yahuwchanon (John) was shown the constellation of the virgin (bethulah), who is “clothed with the sun.” To learn more about the birth of Messiah on the Feast of Trumpets, as prophesied about in Revelation 12, see my other blog: When Was the Messiah of Israel Born? 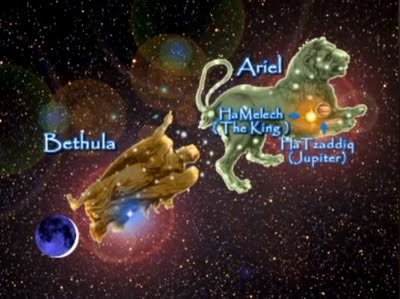 As you can see from the above definitions, the earth turns daily, causing the inhabitants of the earth to turn back to the light of the world, which is the sun (symbolic of Messiah).
As the earth turns, the light of the sun rolls over it, just like these clay seals roll over clay, causing the images on earth to stand out and become visible. The word “garment,” is also a euphemism for “a wife,” because YaHuWaH is daily converting souls back to him, and making them his bride!
And when these souls become his bride, he clothes them with a WHITE WEDDING GARMENT!
Yowb (Job) 29:14 I put on righteousness, and it clothed me: my judgment was as a robe and a diadem.
Yeshayahuw (Isaiah) 61:10 I will greatly rejoice in YHWH, my soul shall be joyful in my Elohiym; for he has clothed me with the garments of salvation, he has covered me with the robe of righteousness, as a bridegroom decks himself with ornaments, and as a bride adorns herself with her jewels.
Chazown (Revelation) 19:8 And to her was granted that she should be arrayed in fine linen, clean and white: for the fine linen is the righteousness of saints.
Chazown (Revelation) 19:14 And the armies which were in heaven followed him upon white horses, clothed in fine linen, white and clean.
As you can see, from the graphic below, Job 38:12-14 is about the inhabitants of the earth being given a chance to repent, and turn back to Messiah, who is the light of the world. These verses are not describing the earth being formed for the first time at the creation. Posted by DoublePortionInheritance at 5:45 PM