The Caduceus of Hermes vs the Fiery Serpent of Moses

By Maria Merola
© Copyright Double Portion Inheritance, September 2014
http://www.DoublePortionInheritance.com
https://www.paypal.com/paypalme/DPIMinistries
Over the years, there have been a few people who have written to me asking about the difference between the Caduceus symbol (often associated with the Medical Industry), and the bronze serpent on a pole fashioned by Moses in the Bible.
It is a reasonable question, since there are a few similarities. However, the differences between these two symbols helps to paint a prophetic picture of the good news of our Messiah, Yahuwshuwa. 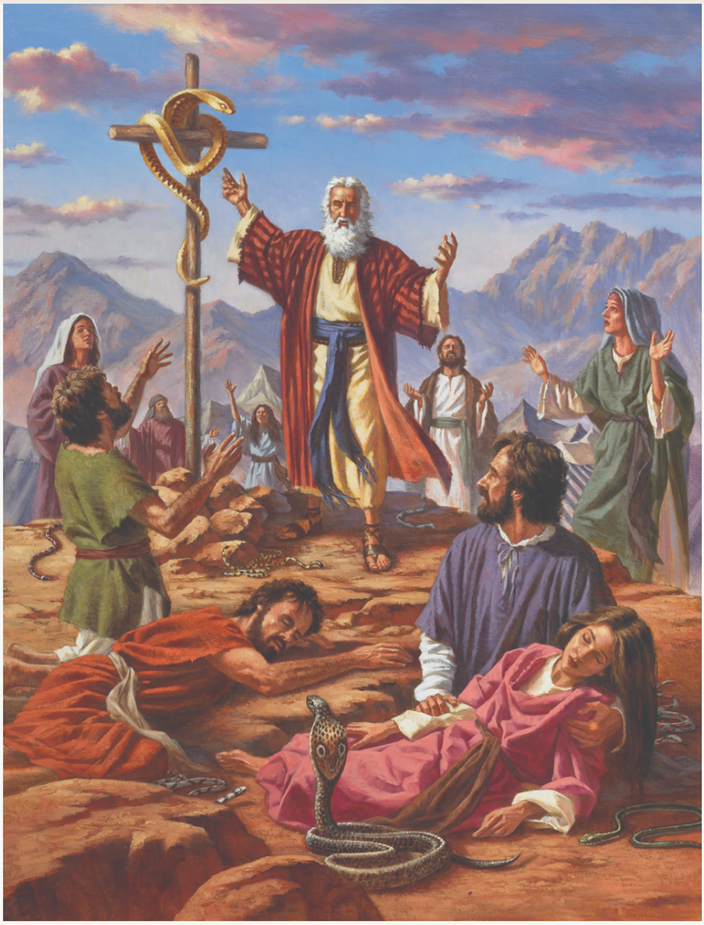 In the book of Numbers, we read an account in the 21st chapter, about how YaHuWaH sent fiery serpents to bite the children of Yisra’el while they were sojourning in the wilderness. This was due to their sin of murmuring against the Almighty, and his servant Moses.
However, despite the fact that they were deserving of death, Yah instructed Moses to give them the antidote for these poisonous snake bites, which resulted in those who had been bitten being healed. To learn more, I highly recommend reading my other blog: Why Does the Bronze Serpent on the Pole Picture Messiah?
Therefore, we have two opposing messages in these symbols:
Caduceus = Two Serpents on One Pole.
Cross of Messiah = One Serpent Destroyed on Two Poles/Two Trees.
You will notice that the Caduceus features TWO SERPENTS, because the devil has infected BOTH HOUSES of Yisra’el, (causing division). In the final days before the return of Messiah, that old devil called “The serpent” will attempt to UNITE these two kingdoms on ONE POLE/ONE SCEPTER under the One World Religion of Anti-Messiah.
Satan is notorious for counterfeiting our Messiah, and his final showdown will involve attempting to unify all the world religions under himself. This will be the test that will separate the wheat from the tares; for those who are the true sheep of Messiah will not be deceived by this impostor. The true sheep have already been reconciled to Elohiym and to one another, for they do not succumb to the adversary’s devises.
Ephesians 2:16 explains:
Ephsiym (Ephesians) 2:16 And that he might reconcile both unto Elohiym in one body by the cross, having slain the enmity thereby.
What is does the word “enmity,” mean? It means “strife, hatred, discord, hostility.” The first mention of this word “enmity,” is in Genesis 3:14-15:
Bereshiyth (Genesis) 3:15 And I will put enmity between you and the woman, and between your seed and her seed; it shall bruise [crush] your head, and you shall bruise [crush] his heel.
The dividing of the Two Houses of Yisra’el began with the unintended marriage of Jacob to Leah, which caused “enmity, jealousy, strife, hostility, discord.” However, despite the fact that Jacob was tricked into a marrying Leah, YaHuWaH had a prophetic purpose for bringing them together, because they were both “The firstborn.”
Rachel is symbolic of the Kingdom of Yahuwdah (Judah) because she was married to Jacob “last,” as she was also the second-born of Laban. In the end of days, the prophet Zacharyahuw (Zechariah) foretold about the day when the Kingdom of Yahuwdah (Judah) will finally be saved, as they will finally behold their Messiah “face-to-face” (Zechariah 12:10).
It will be this event that will bring about the unification of the Two Houses of Yisra’el, which will result in the imprisonment of adversary, and all the strife, vexation, and envy that he has incited between these two kingdoms. The prophet Isaiah foretold of this day, when these two kingdoms will not longer have “enmity,” towards one another:
Yeshayahuw (Isaiah) 11:13 The envy also of Ephrayim shall depart, and the adversaries of Yahuwdah (Judah) shall be cut off: Ephrayim shall not envy Yahuwdah (Judah), and Yahuwdah (Judah), shall not vex Ephraiym.
But Yahuwshuwa is a representation of the fiery serpent being destroyed on TWO TREES or TWO CROSSED STICKS, because he has ABOLISHED THE DIVISION of the Two Houses, making them ONE! Through this story in the book of Numbers, YaHuWaH was showing us a prophetic picture of ONE HOUSE of Yisra’el being united under his ONE SCEPTER, UNDER ONE KING!
The Caduceus also has wings, because Satan is a fallen angel that wants to be worshipped. The Greco/Roman Mythology character of Hermes (the Romans knew him as Mercury), carries a wand was a caduceus (a winged staff with two snakes wound around it). The Roman myth of Asclepius and the snake became known as Toxicological Symbols in Ancient Greece and Rome. Asclepius was supposedly “The god of healing and medicine,” (obviously a counterfeit of Messiah). 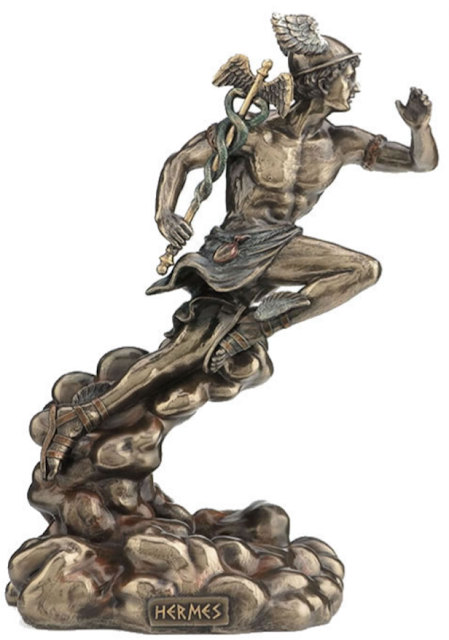 The Caduceus on the left side of the above illustration represents the serpent in the garden who brought the curse of sin and death upon all of humanity.
The Bronze Serpent on the right side represents the one who became a curse for us, having slain the enmity (hatred) of the serpent against all of humanity!
The one on the left is a cursed idol, and an abomination. The one on the right tells the good news of Messiah, who destroyed the power of sin, death, and the curse of the serpent!
The one on the left is poisonous, and leads to eternal death. The one on the right is the antidote for the poison, and leads to eternal life.
The Dictionary defines this term “Antidote” as follows: A medicine or drug, or agent that counteracts or neutralizes the effects of a poison.
Who is the physician that will heal his people?
Yirmeyahuw (Jeremiah) 8:22 Is there no balm in Gilead; is there no physician there? Why then is not the health of the daughter of my people recovered?
The Antidote:
1st Yahuwchanon (John) 3:8 He that commits sin is of the devil; for the devil sinned from the beginning. For this purpose the Son of Elohiym was manifested, THAT HE MIGHT DESTROY THE WORKS OF THE DEVIL.
An antidote is often created by using the same substance as a virus or a poison, (in smaller doses), so that the human body will make new antibodies that fight off the virus if it should attack the cells. Our Messiah understood these things long before Modern Medicine, because he is our Creator! He used the poison of the serpent to create the antidote, which is the blood of the Lamb!
For many years scientists have explored ways to develop antidotes for the poisons of snakes. Years ago they used horses, but today many places use lamb or sheep to develop these anti-venoms that neutralize the effects of snake venom. 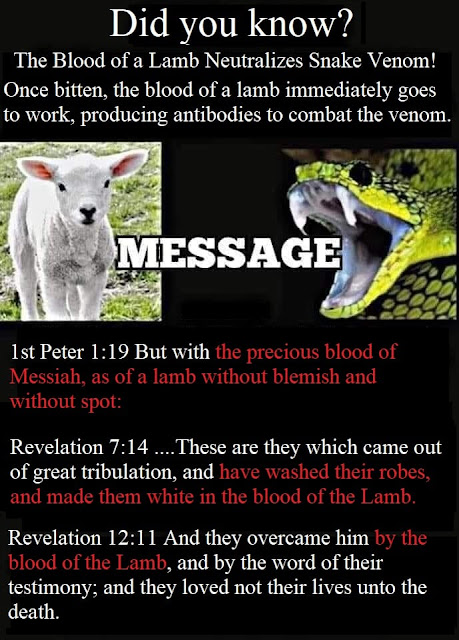 They would inject a lamb with specified quantities of venom. The blood of the lambs would immediately go to work, producing antibodies to combat the venom.
When the blood of the lambs have generated enough antibodies, those antibodies would be extracted from the blood of that lamb and an anti-venom would be formulated.
When a person now is bitten by a similar snake, that same anti-venom is administered, and it neutralizes the effects of the venom within the victim.
*Disclaimer: The Torah commands us not to consume blood of any kind, whether from an animal or a human (see Genesis 9:4; Leviticus 7:26-27; Acts 15:29).
The fact that Scientists have found that sheep’s blood contains anti-venom from a snake bite, is only meant to be a METAPHOR of Messiah Yahuwshuwa’s blood!
This Scientific fact sends out a message to the world, that the only thing that can set us from from the Serpent’s bite, is the Blood of Messiah, Yahuwshuwa! See these news articles:
Sheep’s Blood Provides Rattlesnake Anti-venom
THE SHEEP THAT SAVE LIVES
Posted by DoublePortionInheritance at 2:52 AM