They Shall Look Upon “ME” Whom They Have Pierced!

By Maria Merola אריאל
© Copyright Double Portion Inheritance, July 2007
http://www.DoublePortionInheritance.com/
https://www.paypal.com/paypalme/DPIMinistries
One of the biggest excuses I hear from Jewish people about why they do not accept Yahuwshuwa as their Messiah, is they claim he was a human sacrifice, which is strictly forbidden in the Towrah. 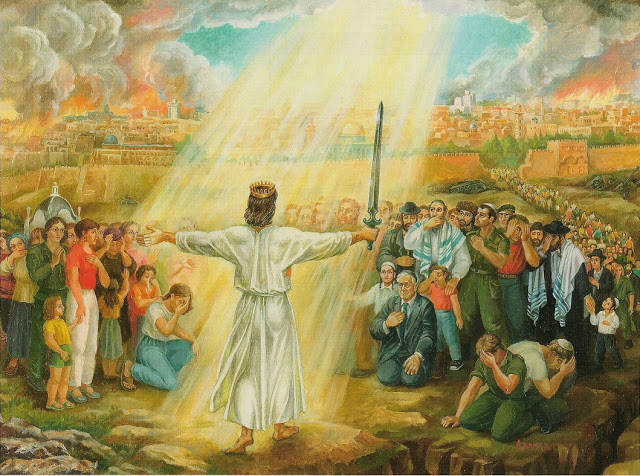 See my other blog entitled  “Was Our Messiah a Human Sacrifice?”
Heathens have been conducting human sacrifices since the beginning, with the first murderous act of Qayin (Cain), who slew his brother Habel (Abel). Satanists practice human sacrifice as a ritual, whereby they believe that they will get their prayers answered by Satan, by offering up the blood of an innocent victim. This is a very selfish and wicked thing to do.
But our Creator is not selfish like that. He loves humanity, (whom he created in his own image and likeness). He would rather suffer and die, than to witness his children be lost forever in eternity. This is why did not offer up somebody else as a human sacrifice. Instead, he paid the price HIMSELF for those deserving of the death penalty.
When Scripture tells us that he sent his only begotten son to die for us sinners, most do not realize that it was the Father himself (clothed in a human mortal body) as he came to portray the “role” of the Son. But how can we be sure that the Father took on the role of the Son? This Messianic prophecy makes it crystal clear:
Yeshayahuw (Isaiah) 9:6  For unto us a child is born, unto us a son is given: and the government shall be upon his shoulder: and his name shall be called Wonderful, Counsellor, The mighty EL, The everlasting Father, Sar Shalom (The Prince of Peace).
The Father, (YaHuWaH), created a mortal human body for HIMSELF, and came to earth to die in place of his first-born son, Yisra’el.
Ibriym (Hebrews) 10:5 Wherefore when he comes into the world, he says, Sacrifice and offering you would not, but a body have you prepared me:
Shemoth (Exodus) 4:22 And you shall say unto Pharaoh, Thus says YHWH, Yisra’el is my SON, even my firstborn:
Yirmeyahuw (Jeremiah) 31:9 ....For I am a FATHER to Yisra’el, and Ephrayim is my firstborn.
His final act of love and humility was to lay down his life for all sinners. Thus, setting the example for us to live by. We are to learn by his selfless act, to lay down our own lives for YaHuWaH, and for others, (rather than to take the lives of others).
Ephsiym (Ephesians) 5:2 And walk in love, as Messiah also has loved us, and has given himself for us an offering and a sacrifice to Elohiym for a sweet-smelling savour.
Ibriym (Hebrews) 7:27 Who needs not daily, as those high priests, to offer up sacrifice, first for his own sins, and then for the people's: for this he did once, when he offered up himself.
If you need proof that our Messiah was YaHuWaH himself, come in human flesh, you will be amazed at a prophecy seen in Zechariah, the 12th chapter.
In the original Hebrew Old Testament (Tanakh), there are many places where the first and last letters of the Hebrew Alphabet appear in the text. These two letters are called the “Aleph & Taw.” 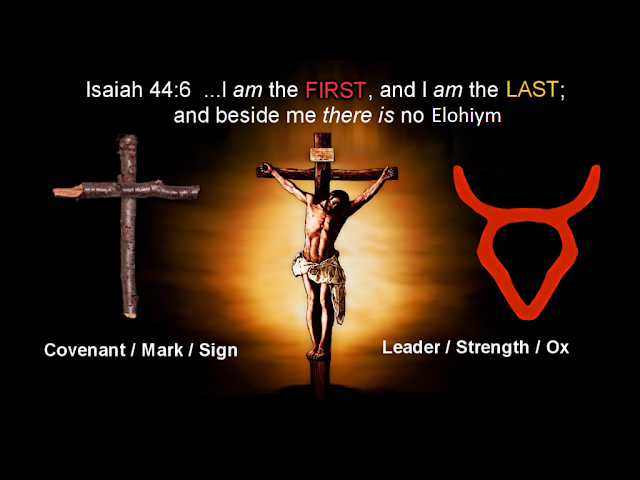 The English translators did not know what to do with two letters, therefore, they were left out of the English translation of the Bible. This word is #853 in the Hebrew Concordance, as follows:
#H853 'eth ayth apparent contracted from 226 in the demonstrative sense of entity; properly, self (but generally used to point out more definitely the object of a verb or preposition, even or namely):--(as such unrepresented in English).
As you can see, this word “eth,” (pronounced like the number “8”), is an object pointer in a sentence. However, it is also a prophetic picture of our Messiah, who is called “The Alpha & Omega,” in the Greek translation of Revelation 1:8 & 11; 21:16; 22:13. Since the Book of Revelation was first written in the Hebrew tongue by the Apostle John (Revelation 9:11; 16:16), we know that he would have written “The Aleph & Taw,” which is the first and last letter of the Hebrew Alphabet.
Whenever we see “The Aleph & Taw” in the Scriptures, this is a prophetic picture of our Messiah (as the lamb slain from the foundation of the world). Now let’s take a look at an “end-time” prophecy in Zechariah 12, which shows us beyond a shadow of a doubt, that YaHuWaH, (the Father) himself, was pierced for us in the human body of Yahuwshuwa (the Son).
Zekaryahuw (Zechariah) 12:6 In that day will I [Aleph & Taw את] make the governors of Yahuwdah (Judah) like an hearth of fire among the wood, and like a torch of fire in a sheaf; and they shall devour all the people round about, on the right hand and on the left: and Yerushalayim (Jerusalem) shall be inhabited again in her own place, even in Yerushalayim (Jerusalem).
Zekaryahuw (Zechariah) 12:7 YHWH [Aleph & Taw את] also shall save the tents of Yahuwdah (Judah) first, that the glory of the house of Dawiyd (David) and the glory of the inhabitants of Yerushalayim (Jerusalem) do not magnify themselves against Yahuwdah (Judah).
Zekaryahuw (Zechariah) 12:8 In that day shall YHWH defend the inhabitants of Yerushalayim (Jerusalem); and he that is feeble among them at that day shall be as Dawiyd (David); and the house of Dawiyd (David) shall be as Elohiym, as the Malak of YHWH before them.
Zekaryahuw (Zechariah) 12:9 And it shall come to pass [HaYah] in that day, that I [Aleph & Taw את] will seek to destroy all the nations that come against Yerushalayim (Jerusalem).
*Note: in the above passage, (verse 9), the phrase “And it shall come to pass” is just one Hebrew word, which is #H1961 “HaYah,” meaning “I AM!”
Therefore, Zechariah 12:9 should say: I, the self-existent one, the one who is, and who was, and who is to come, in that day, I [Aleph & Taw את] will seek to destroy all the nations that come against Yerushalayim (Jerusalem).
This means that the same person who is speaking of himself “in the first person” is the same one that spoke to Mosheh (Moses) at the burning bush in Exodus 3:14-15.
Zekaryahuw (Zechariah) 12:10 And I will pour upon the house of Dawiyd (David), and upon the inhabitants of Yerushalayim (Jerusalem), the spirit of grace and of supplications: and they shall look upon [Aleph & Taw את] ME whom they have pierced, and they shall mourn for HIM, as one mourns for his only son, and shall be in bitterness for HIM, as one that is in bitterness for his firstborn.
You will notice, (in verse 10), that the “ME,” and the “HIM” are the same person who was PIERCED!
Below is a screenshot from esword, showing the Paleo Hebrew Pictograph letters in Zechariah 12:10. You will see the “Aleph & Taw,” is there in the place where the English translators used the word “ME! ” In other words, it was YaHuWaH himself, who was pierced! He created a mortal human body for himself, and he, (Aleph & Taw) was pierced! 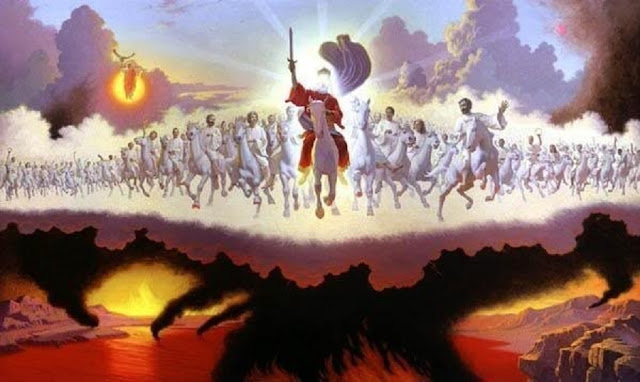 Chazown (Revelation) 1:7 Behold, he comes with clouds; and every eye shall see him, and THEY ALSO WHICH PIERCED HIM: and all kindreds of the earth shall wail because of him. Even so, Awmane.
Chazown (Revelation) 1:8 I AM [EGO EIMI, HAYAH], [Aleph & Taw את] THE BEGINNING AND THE ENDING, says YHWH, WHICH IS, AND WHICH WAS, AND WHICH IS TO COME, THE ALMIGHTY [EL SHADDAY].
As I previously explained, (in some of my other writings), in all of our English Bibles, whenever we see the term “The Lord” in the New Testament, it is difficult to know whether or not it is speaking of the proper name of YaHuWaH, or if it is the word “master.”
But since there are three Greek words for “Lord” in the Briyth Chadashah (NT), all we have to do, is look up the Greek word for “Lord” in Revelation 1:8.
The other two words for “Lord” (despotes and oikodespotes) simply mean “master, or the head of the household,” etc.
However, whenever the Greek word for “Lord” is “kurios” it is the Greek translation for YaHuWaH!
Posted by DoublePortionInheritance at 12:32 AM