Maria Merola אריאל
© Copyright Double Portion Inheritance, July 2007
http://www.DoublePortionInheritance.com/
https://www.paypal.com/paypalme/DPIMinistries
Debariym (Deuteronomy) 4:7 For what nation is there so great, who has Elohiym so near unto them, as YHWH our Elohiym IS IN ALL THINGS that we call upon him for?
In 1964, Elvis Presley played two different parts in the movie entitled “Kissin’ Cousins.” And no, the movie was not about incest---It was a play on words. 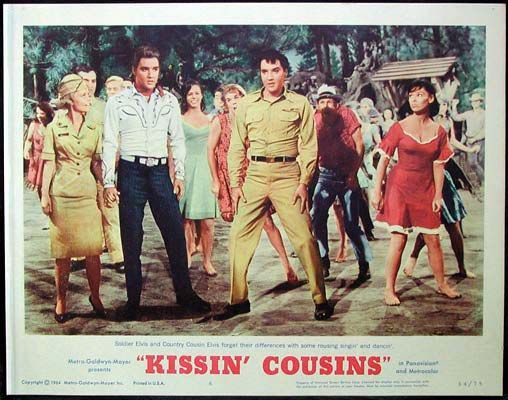 “Kissin’ Cousins is a term that means the following: “A relative known well enough to be greeted with a kiss. Something that is of a very similar character to another thing of the same type.”
*Example: “beneath the surface, gospel music and the blues are kissing cousins.”
The reason why so many are confused about the ESSENCE & NATURE of Elohiym, is because we try and put him into a box that only our “FINITE & CARNAL MIND” can comprehend.
I know that none of these things are a perfect analogy, but I will try my best to illustrate how I see YaHuWaH playing many different roles in scripture in order to teach us his ways.
YaHuWaH showed us in the Tanakh (Old Testament), his role as a “FATHER TO ISRAEL” (Exodus 4:22; Jeremiah 31:9).
But he also showed us his role as a “HUSBAND TO ISRAEL” (Jeremiah 31:32; Hosea 2:7; Isaiah 54:4).
Does this mean that Yisra’el (Israel) married her own Father?
Of course not! That would be incest!
Yet, in the Briyth Chadashah (New Testament), YaHuWaH came to earth and showed himself as “THE FIRST-BORN SON” of Yisra’el, so that he could illustrate for us what it looks like to be an obedient Son!
You see, YaHuWaH plays all these roles in front of us: The High Priest Melchizedek, The Bridegroom, The Kinsman Redeemer, The Heavenly Father, The First-Born Son, The Lion, The Lamb, The Red Heifer, The Big Brother, The Younger Brother, The Good Samaritan, The Yom Kippur Twin Goats (The Sacrificial Goat & The Scapegoat), The Sun of Righteousness, The Bright & Morning Star, The Branch, King of Kings & Lord of Lords, etc.
These are all METAPHORS!
He does this in order to show us his plan of salvation!
Otherwise, Yisra’el would be accused of “bestiality”, for marrying a Lion, a Lamb, Two Goats, and a Red Heifer!
YaHuWaH did not send his Son to marry his ex-wife, Yisra’el (Israel).
YaHuWaH himself came to earth, and put on a human-flesh body, and he BECAME THE SON, IN ORDER TO REPRESENT SINFUL HUMANITY!
None of these ROLES are a perfect, or a complete analogy. These are prophetic pictures, as they are each “ONE FACET” TO ONE SIDE OF A DIAMOND.
If we were to move to the other side of the diamond, we would see a different colored facet!
If you want to get technical, YaHuWaH is going to marry all those who have been born from above, at the Marriage Supper of the Lamb. That includes both, males and females!
Does that make him bisexual? Yah forbid!
Do you see how all these roles that he plays in front of us are simply METAPHORS?
YaHuWaH operates like a corporation.
*Example: I, Maria Merola am ONE PERSON, but if I own three businesses, I am a CORPORATION:
Maria’s Hair Salon.
Maria’s Pet Store.
Maria’s Restaurant.
In my corporate bylaws, I employ wording that treats my corporation as “we” or “us,” even though I am only “one person” who owns all three businesses.
Here is a true story. I know a man who owns a Construction Company, and also a Heating & Air Conditioning Company. He is incorporated, and therefore, he makes the Heating & Air Conditioning Company a “subsidiary” of his Construction Company.
As the head of his own corporation, he is the CEO (Chief Executive Officer). However, he is also an employee of his own Heating & Air Conditioning Company, because he made himself a “subordinate” of his own corporation!
He pays himself a weekly salary, and he is the employee of himself!
Does that make him two different people? Of course not!
I am a mother, a wife, and a daughter all at the same time.
That does not make me three people!
Posted by DoublePortionInheritance at 12:40 PM