The Fall Feasts of YaHuWaH in the Seventh Hebrew Month 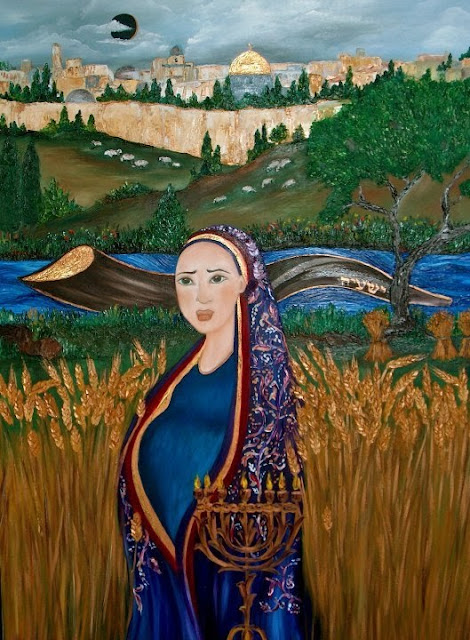 There seems to be some confusion about the fact that on the 1st day of the 7th month of Tishri, the Jewish people refer to “Yom Teruw’ah” as their New Year or “Rosh Ha’Shanah” (The Civil New Year) but the scriptures call it “a day of blowing” or “Yom Teruw’ah” (The Feast of Trumpets).

Visit her website to see more of her artwork: http://www.artofthecovenant.ca/
There are actually two calendars represented in scripture that we can observe, and they all revolve around the seven annual feasts as well as the three main harvest seasons in Yisra’el. The first is the “Civil Calendar” which begins on the 1st of Tishri (the 7th month), and the second is the “Sacred Calendar” which begins on Abib (Aviv or Nisan). From Genesis 1 to Exodus 12, scripture uses the Civil Calendar when referring to dates. However, in Exodus 12, Elohiym instituted a second calendar which begins on Abib/Aviv (Nisan). This is the “Sacred Calendar,” which the Bible uses when referring to dates from Exodus 12 thru Revelation 22.
The Sacred Calendar is Seven Months Long
In Exodus 12, YaHuWaH Elohiym instituted a second calendar which begins on the 1st of Abib (Aviv or Nisan). This is the “Sacred Calendar” which the Towrah uses when referring to dates from Exodus 12 thru Revelation 22. The Sacred Calendar marks the beginning of the Sacred or Spiritual New Year and it governs the timing of YaHuWaH’s Feasts outlined in Leviticus 23.
YaHuWaH’s Feasts set the appointed times (days) for the manifestation of Elohiym’s redemption in Messiah Yahuwshuwa, which has to do with our spiritual position in him. Passover celebrates the beginning of our salvation through the blood of Yahuwshuwa (The Passover Lamb), and takes place in the first month of the Sacred Calendar. Consequently, the 1st of Abib (Aviv/Nisan) marks the beginning of Elohiym’s Spiritual New Year in Messiah that he established at the Exodus:
Shemoth (Exodus) 12:1-2 And YHWH spoke unto Mosheh (Moses) and Aharown (Aaron) in the land of Mitzrayim (Egypt) saying, This month shall be unto you the beginning of months: it shall be the first month of the year to you.
Shemoth (Exodus) 13:
3 And Mosheh (Moses) said unto the people, Remember this day, in which you came out from Mitzrayim (Egypt), out of the house of bondage; for by strength of hand YHWH brought you out from this place: there shall no leavened bread be eaten.
4 This day came you out in the month Abib.
The word “Abib” is #24 in the Strong’s Hebrew Concordance: to be tender; green; young ear of grain; hence the name of the month Abib; green ears of corn (not maize).
Consequently, the Jewish people have a “fiscal year” where they “account” for their harvest. Many businesses today have what is called “a fiscal year” where the company does their annual inventory in the autumn of the year as they report their income to the government. This is the same thing that the Jews mean when they refer to this time of year as a “Civil New Year” called “Rosh Ha’Shanah.”

However, in the 1st month of the year called Abib (Aviv or Nisan), this commemorates the time when YaHuWaH brought Yisra’el out of Egypt. This is to be celebrated 14 days before Passover.
The idea of calling the 1st day of the 7th month of Tishri “Rosh Ha’Shanah” comes from the fact that on the “Rabbinic Calendar” reckoning, they are using the calendar that was instituted before YaHuWaH brought Yisra’el out of Egypt.
Two scriptures are primarily used to defend the Jewish New Year as Rosh Ha’Shanah:
Shemoth (Exodus) 23:16 “The feast of ingathering, which is in the end of the year, when you have gathered in your labours out of the field.”
Shemoth (Exodus) 34:22 “You shall celebrate... the Feast of Ingathering at the turn (revolution) of the year.”
The End of a Seven-Month-Long “Sacred Year”
The end of the year mentioned in these two scriptures refers to Yisra’el’s Sacred Calendar whereby the feasts are measured based on a seven-month-long cycle. These feasts begin with Passover and end seven months later with Tabernacles. This agricultural year begins with the spring barley harvest during the season of Passover and ends with the fall wheat harvest on the last day of Tabernacles (Sukkoth). This agricultural calendar is based on a seven-month-long lunar cycle, which refers to the monthly rotation of the moon around the earth. Thus we can observe that the seasons of harvest revolve around the Spring & Fall Feasts of YaHuWaH:
1.) The Spring Barley Harvest on First-Fruits following Passover.
2.) The First Wheat Harvest on Shabuwot (Pentecost).
3.) The Grape Harvest on the Day of Wrath for the wicked (Yom Kippur).
4.) The Second Wheat Harvest during the Feast of Tabernacles (Sukkot).
We see this seven-month cycle described as follows in scripture:
Bereshiyth (Genesis) 8:22 While the earth remains, seedtime and harvest, and cold and heat, and summer and winter, and day and night shall not cease.
The word for “seedtime” in the above verse is as follows:

Yom Kippur is coming up projected to begin at sundown on the 15th or the 16th of September (in 2013), and it is important that you understand the role of the “Heavenly Father & the Son” seen in the “Yom Kippur Twin Goats.”
In Yeshayahuw (Isaiah) 9:6 we see a prophecy about the “Son” being born to us, and he shall also be called “The Everlasting Father” (Abiyad).
Yeshayahuw (Isaiah) 9:6 For unto us a child is born, unto us a son is given: and the government shall be upon his shoulder: and his name shall be called Wonderful, Counselor, The mighty Elohiym, The everlasting Father, The Prince of Peace.
In the Hebrew Old Testament on esword, it is #5703 seen as five letters: Aleph, Beyt, Yad, Ayin, Dalet: דאביע
Ab (Father) and Ad (everlasting) which put together is ABYAD. What does this word Abyad mean? Let’s look at the Hebrew Letters that spell this word:
Aleph = the head of an ox, or the red heifer, power, strong leader.
Beyt = the family, the house.
Yod = the arm or hand.
Ayin = the eye.
Dalet = the door.
So we have the Father (Ab) which means “the head of the household, the leader.” And then we have the Yod, which means “the arm” (this is the Messiah who implements the Father’s plan). And then we have the eye and the door (ayin, dalet), seen by the two letters “Ad,” since the door to eternity is Messiah (John 10:7-9), and he watches over us and instructs us with his “eye” (Psalm 32:8). The Father of the house is the arm, the eye and the door! This shows us a picture of the Father and the Son as one being----ABYAD!
The Father, YaHuWaH and the Son, Yahuwshuwa are one and the very same being! This is the reason why so many are falling away from Messiah within the Hebraic Root’s Community. It is because they cannot see that the Father & the Son are one and the same person.
Another example can be seen with the 4th son of Ya’aqob (Jacob) named Yahuwdah (Judah). He was the “father-in-law” of Tamar and he became the “kinsman redeemer” for Tamar. Judah was the close relative of his oldest son “Er” who died without giving Tamar a son. Therefore, Yahuwdah (Judah) was unknowingly fulfilling the “law of the kinsman redeemer” found in Deuteronomy 25:5-10.
Yahuwdah (Judah) promised to send his son (Shelah) but Judah himself (the father) became the kinsman redeemer when he impregnated Tamar with twins!
Before Judah went into Tamar, he promised to send her a “goat” (the Yom Kippur scapegoat that is sent). This is a picture of the Heavenly Father who became the kinsman redeemer and he “sent” his Son (the Yom Kippur scapegoat) as the “oath” for the widowed wife (Yisra’el).

Please see the blogs below:

“The Twin Goats on Yom Kippur Fulfilled in Messiah Yahuwshuwa.”
http://doubleportioninheritance.blogspot.com/2011/05/twin-goats-on-yom-kippur-fulfilled-in_25.html
Please see the blog:
“The Father & the Son Seen in Judah, the Kinsman Redeemer.”
http://doubleportioninheritance.blogspot.com/2012/08/the-father-son-as-kinsmen-redeemer_3.html
Find out the dates of this year’s (2013), Mowediym (Holy Days) according to the true Biblical Calendar, based on the Abib (ripening barley) and crescent New Moon.
http://aroodawakening.tv/feasts-dates/
Biblical Rosh Hashanah (Head of the Year) – Sundown March 13th, 2013.
Pesach (Passover) – Sundown March 26th, 2013.
Feast of Unleavened Bread (Chag Matzah) – Sundown March 27th, 2013.
First Fruits (Yom ha’Bikkuwriym) – March 31st, 2013.
Feast of Unleavened Bread Concludes – Sundown April 3rd, 2013.
Shabuwot – Sundown May 18th, 2013.
Yom Teruw’ah (Day of Trumpets) – Sundown Sept 7th, 2013.
Yom Kippur – Sundown Sept 16th, 2013.
Feast of Tabernacles (Sukkot) – Sundown Sept 21st – Sept 28th , 2013.
The Last Great Day – Sundown Sept 28th, 2013.
Feast of Dedication (Chanukkah) – Sundown Nov 29th – Dec 7th, 2013.
Puwriym – Sundown Feb 14, 2014 (possibly sundown Feb 13th depending on moon sighting).
Aaronic Blessing
Bemidbar (Numbers) 6:22-27 And YHWH spoke unto Mosheh, saying, Speak unto Aharown and unto his sons, saying, On this wise you shall bless the children of Yisra’el, saying unto them, YHWH bless you, and keep you: YHWH make his face shine upon you, and be gracious unto you:  YHWH lift up his countenance upon you, and give you shalowm.”
May YaHuWaH our Heavenly Father reveal himself to us through his Son, Yahuwshuwa ha’Mashiyach as we observe his prophetic mowediym, his appointed feasts!
Posted by DoublePortionInheritance at 7:44 PM