The “Yahweh” Pronunciation is Greek 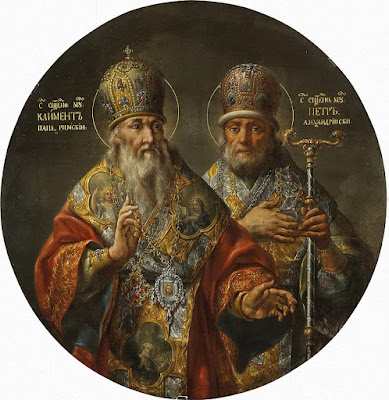 Evidence for Yahweh by Several Early Greek Writers?
http://www.yahushua.net/YAHUWAH/chapter_09.htm
Pictured above is an artist’s depiction of Saint Clement & Saint Peter of Alexandria Egypt, so-called early “Church Fathers.”
What’s wrong with the above statement? “Several early Greek writers of the Christian Church testify that the name was pronounced Yahweh.”---The Modern Judaica Encyclopedia, Vol. 7 p. 679: YaHuWaH is a Hebrew name!
On the surface, the above quote sounds pious doesn’t it? Very few scholars detected anything. Who were these Greek writers?
“The pronunciation, Yahweh, is indicated by the transliteration of the name into Greek in early Christian literature. . ‘by Clement of Alexandria, and by Theodoret. . . . Strictly speaking, Yahweh is the only name of god.” The New Bible Dictionary p. 478 by J.D. Douglas. Not mentioned in the quote, but also used for evidence for Yahweh, is Epiphanius (who wrote Iabe) and Origen who wrote (Iae).
The Catholic Church quoted fairly: “... Judging from Greek transcriptions, the Set-Apart Name.. YHWH ought to be pronounced Yahweh.” 8
Gesenius stated in his Hebrew-Chaldee Lexicon “this same form appears on the gems of the Egyptian Gnostics as the name of God ...[but these gems are not of the most remote antiquity; they are the work of heretics of the 1 second and third centuries].” (brackets not supplied) under #3068 Jehovah
Clement of Alexandria was a teacher of the Gnostic’s; Origen was one of his students. The Masons and Catholics alike claim Clement, Origen, Theodoret and Epiphanius as the forefathers of their faith.
Simon Magus (Acts 8:9-24) was the father of Gnostic heresies, also pseudo-messiah, he was a teacher who went to Rome and taught angelology and astrology.
The school in Alexandria was mixing paganism in the true apostolic faith and promoting “sun-god worship.” It was the school of Gnosticism that prepared the way for the Papacy to be established. Constantine was also a Gnostic Christian. Some of their heretical beliefs:
Predestination from astrology! The body could never be saved! That prophets were not dependable for inspiration! They believed in magic! Sprinkling instead of baptism by immersion! Sunday worship! Hatred for the Torah!
The Jesuits restored Gnosticism in the Council of Trent:
“The Society of Jesus proposed to subordinate the Holy Scriptures and in their place substitute the interpretations of the Bible by the ecclesiastical writers of the first centuries whom they call the ‘fathers.’ All the errors and vagaries of the allegorizers who confused and darkened the first three centuries were selected. The first great papal council which assembled after the Reformation, the Council of Trent (A.D. 1545-1563), was dominated by the Jesuits. This assembly laid down the law, and no papal authority has dared since to dispute it.”---Truth Triumphant p. 317
Why use Greek writers for evidence anyway? Greeks were notorious for altering Hebrew names.
Compare Hebrew and Greek Names
Notice the “ah” or “a” ending in Hebrew vs. “e” in Greek!

Though these Greek Gnostic Scholars loved to walk around in white pretentious robes, our Creator labeled men such as these as a kingdom with spots “like a leopard” (Daniel 7:6). Can the leopard change his spots? (Jeremiah 13:23). How then can they do good that are accustomed to doing evil, including changing names? Our Creator knew that these Gnostic Greek Scholars would seek to remove the children of Israel far from their border!
Yahuwshuwa the Messiah is coming back for a glorious congregation “not having spot, or wrinkle, or any such thing; but that it should be holy and without blemish” (Ephesians 5:27).
The Roman Catholic Douay version was largely based on the Greek Septuagint and thus many names ended with an “e.”
In the last days our Creator said: “I will turn to the people a pure language.” For what purpose? “That they may call upon the name of YAHUWAH, to serve Him with one consent” (Zephaniah 3:9). What language should we consult to derive the true pronunciation of the set-apart name? Certainly not the Greek! However Scripture tells us which language it is.
Thus saith YAHUWAH of hosts, “In those days it shall come to pass, that ten men shall take hold out of all the languages of the nations, even shall take hold of the skirt of him that is a Yahuwdiy, saying, ‘We will go with you: for we have heard that Elohiym is with you.’” (Zechariah 8:23). It seems strange that scholars only mention the evidence of the early Greek writers. Why do they not give all the other evidences?
The evidence from Origen is “Iae,” but this was also the name of a pagan god. In the “Dictionary of World Mythology” by Cotterell under Kuat, who is “The sun god in Kamaiuran mythology.” We find that “Iae” was the moon god, and brother to Kuat. Strange that Origen came up with this, when Clement his teacher used Iaoue.
“Clement, most famous of the Alexandrian college faculty and teacher of Origen, boasted that he would not teach Christianity unless it were mixed with pagan philosophy.”----Truth Triumphant p. 47
The Greek language does not even have a “Y” sound, or an “H” sound in the middle of a word, nor a “W,” nor an “sh” sound. Neither did the Latin have a “W” sound, nor an “sh” sound. Therefore many early believers contended that the Messiah’s name could only be pronounced from the Hebrew correctly.
Posted by DoublePortionInheritance at 4:48 PM