What is the Connection between President Trump, Pope John Paul II, and Joseph Gregory Hallet aka the New King John III of the United Kingdom? 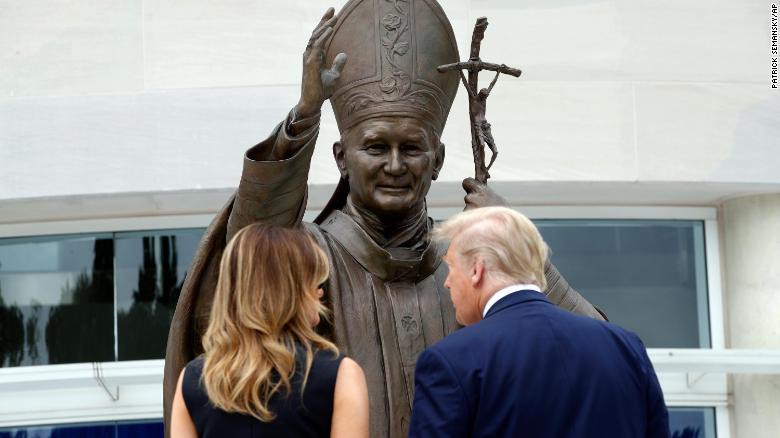 You may ask why I think President Trump is involved with the Illuminati and the Global Elite. What follows are 18 reasons why.

1.) The Illuminati-based Simpson’s Cartoon predicted his presidency 16 years before it happened. The writer of the Simpson’s admits to being a member of the Illuminati. Not only was there a prediction of Trump’s Presidency in the cartoon, but they showed him wearing the very same blue suit (and red necktie) and coming down the very same escalator just as it happened in real life.

2.) The Back to the Future Movies (written by Zionists Stephen Spielberg & Robert Zemeckis) predicted the events of 9/11 & Trump’s Presidency 30 years before it happened.

4.) President Trump made statements at the Bilderberg Meeting after his election that he would do everything in his power to fight against “Roman Catholic persecution.” He did not say that he would fight against persecution of Christians in general. This means that when the Vatican implements their Sunday Sabbath Law, he will take the side of the Vatican over the side of Seventh Day Sabbath keepers.

5.) President Trump went to the Vatican wearing all black (as all previous Illuminati/Freemason Presidents have done). Melania, Ivanka & Jared Kushner also wore black. It is a well-known fact that whenever a political leader goes to the Vatican to meet with a Pope, he will not be granted a private audience with a Pope unless he acknowledges the Pope as “A reincarnation of Jesus Christ on earth.” He must sign a document stating this before being granted a private audience with a Pope. Once the document is signed, the political leader must also kiss the “Skull & Bones Ring” on the Pope’s finger to pledge allegiance to the Illuminati.

This information was taken from several different sources:

The Vatican Assassins by Eric Jon Phelps.
The Alberto Story by Chick Publications.
The History of the Jesuits by Edward Paris.
Fifty Years in the Church of Rome by Charles Chinnequy.

6.) President Trump kept CFR and Bilderberg members in his cabinet and hired them to work for him. If he was draining the swamp, why hire swamp people?

7.) President Trump declared a National Emergency, which put our country under FEMA, under Fauci, Birx, and the World Health Organization, which ultimately lead to the nation’s economy being damaged. I believe he did this on purpose to take down the Federal Reserve (which seems like a good thing). However, he is part of the Financial Global Reset that is getting ready to take place under the NESARA/GESARA Act.

8.) President Trump went to visit the Shrine of Pope John Paul II in Poland in the summer of 2019 and bowed to his graven image.

10.) On the very same day, (May 14th, Saint Corona Day), President Trump also announced that he would deploy military forces to distribute a Vaccine to Americans (even though he campaigned on the promise that he would fight against abortions and vaccines).

11.) On June 2nd, 2020 President Trump worshiped a graven image of Pope John Paul II with his wife Melania at the National Shrine of John Paul II in Washington D.C.

12.) Three different Rabbis have stated that Trump converted to Chabad Lubavitch Judaism in 2017, which purports that Rabbi Schneerson was the Messiah (even though he died in 1994). This means that Trump denied our Messiah Yahuwshuwa (1st John 2:22 says that such a person is an Antichrist).

14.) Revelation 13:11-18 accurately describes America and its leader as “the second beast with two horns” who exercises all the power of the first beast (Rome). It goes on to say that this “second beast” (America) will make an image to the first beast “whose deadly wound to the head was healed.” Pope John Paul II died of a brain aneurysm in 2005, and now they are claiming that he lives again in the person of Joseph Gregory Hallet. Additionally, Pope John Paul II survived an attempted assassination in 1978 and he claimed that “Mary healed him from the deadly bullet wound.” In the year 2000, the United States Congress minted a gold coin with Pope John Paul II’s image on it. And now, there is a Shrine to Pope John Paul II in Washington D.C. Thus, the second beast (America) made an image to the first beast (the Pope of Rome) whose deadly wound was healed!

15.) President Trump secretly signed an agreement with the new Joseph Gregory Hallet (King John III) of the United Kingdom, who has made the claim that he is the legitimate heir to the Royal Throne. President Trump is related to him, as they are both from the Jewish Scottish Rite Merovingian Bloodline (those who claim that they are descendants of Jesus Christ & Mary Magdalene). Joseph Gregory Hallet (King John III) claims that he is the reincarnation of Pope John Paul II, and that Pope John Paul II (being a Merovingian Jew himself) was possessed by Maitreya “The Christ for all religions.”

16.) In 2014, the false prophet named Kim Clement predicted Trump’s Presidency and his recovery from an Impeachment attempt. Kim Clement died only three weeks after Trump’s presidential victory in November 2016 of a brain aneurysm (just like Pope John Paul II). Kim Clement also “prophesied” that Bill Gates would become a great financial blessing to the Christian Church, and that Pope Francis was a “man of god.” Kim Clement was a false prophet who was repeating things he had foreknowledge of because he was a secret Jesuit Agent of Rome. Interestingly, the Greek word for “sword” in Revelation 13:14 means “judicial punishment” which is the same thing as Impeachment. Trump survived this deadly wound to his authority (head) just like they are purporting about Pope John Paul II. Kim Clement also “prophesied” that Trump would convert to Roman Catholicism in his second term. He also “prophesied” that Kanye West would become “a born-again Catholic.” Kanye West is being used to help lead African Americans to vote for President Trump.

See these calculations at AntichristCalculator.com

Gematria can be used for good or evil. So long as you only use it for counting the number of the beast (as scripture commands), you are not using it in an improper way.

But if you use Gematria for personal fortune-telling or divination purposes, then it is witchcraft.

Below is a link where it shows you how to count the number of the beast based on scripture:

How to Calculate the Number of the Beast

If this blog has been a blessing to you, please make a donation at this link:  paypal.me/DPIMinistries

Posted by DoublePortionInheritance at 8:56 PM